A new study by Yole Développement predicts the convergence of a perfect storm of conditions that will finally drive significant growth in IoT over the next two years.

Cellular IoT is set to benefit from 5G deployments in both public and private networks (on private and public frequencies), which will push the market value to over $700 million over the next three years. That’s according to a new report from French analyst house, Yole Développement[1].

By then, the market will comprise of two distinct categories: low-volume, high-cost modules for 5G; and high-volume, low-cost devices for NB-IoT and LTE-M applications.

Multiple approaches have been tried in the past to develop IoT, using unlicensed frequencies, through protocols such as IEEE802.15.4-based Zigbee or Z-Wave, the LoRaWAN and Sigfox protocols, or long-range Wi-Fi.

But this has not been a success, mainly due to the general requirement for data reliability and security, which can be defined as confidentiality, integrity, and availability. But this is now changing with cellular protocols aimed specifically at IoT, says the report.

These cellular protocols range from the low data rate NB-IoT to the very high data rate, high reliability, low latency 5G Cat20. The latter has finally started to see traction from the industry.

As a result, Yole’s analysis predicts the increasing use of cellular IoT between now and 2023 as worldwide deployments of Standalone (SA) 5G public networks continue to grow, which will increasingly bring IoT-dedicated network slicing to the table.

At the same time, Yole sees the growth of private networks as a further driver to IoT growth. Today, it says, such deployments are aimed at high-value applications and often at a pilot level. But, as more private networks (PNs) are deployed (using both private and public radio frequencies), PNs are expected to be used for lower value IoT applications, especially those using LTE-M or future NR-Light protocols. As noted, a mix of technologies will result, with different approaches being more suited to different applications. 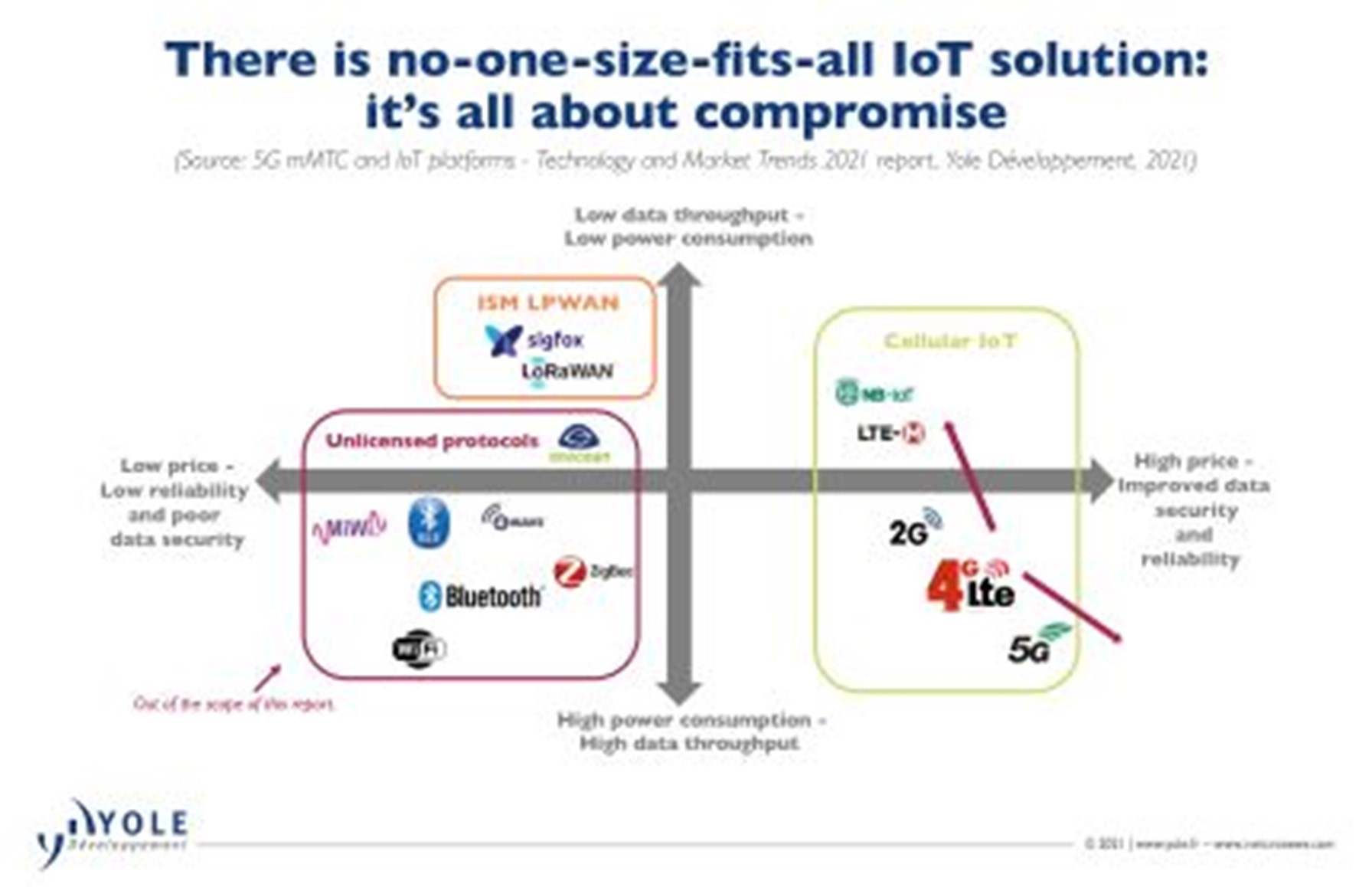 Indeed, its forecast for strong IoT growth in the next few years is based on the conjunction of a number of events: increased SA 5G public deployments (which will bring IoT-dedicated network slicing); the growth and development of private networks; and, lastly, the introduction of cheaper RF modules, which today are expensive and only produced by a handful of manufacturers. “The IoT industry needs this diversification and strengthening of supply,” notes the report.

The democratisation of IoT

But, once greater adoption of cellular IoT takes off, this will result in ‘democratisation’ of IoT, which will be followed by industrial consolidation in the longer term, and ubiquitous use of the licensed radio frequencies for non-consumer purposes.

“Cellular deployment is expensive, either on a capital expenditure standpoint for private networks or an operating expenditure standpoint when using public networks. But 5G offers unprecedented capabilities in terms of data security, creating a market opportunity for critical applications. These are niche applications, for example, in highly automated industrial environments, where wireless connectivity adds a lot of value,” notes Cédric Malaquin, Technology & Market Analyst, RF Devices & Technology at Yole, and author of the study.

He adds: “Other applications range from machine vision to autonomous guided vehicle monitoring. They are now motivating investment in 5G deployments, thus opening the market for all other cellular-based deployments to come.”

As a result, Yole predicts that market volume will reach 900 million devices by 2026 – this started in 2020 with a volume of 298 million units driven by the replacement of 2G/3G devices like points of sale or telematics, it says.

However, it adds a note of caution: these volumes are still far from the billions of industrial-connected devices anticipated by technology companies several years back. This is mostly due to the niche nature of IoT applications. But it will still represent a significant market opportunity.

It seems that 5G is finally set to unlock the potential of the IoT industry, which until now has largely succeeded at the niche-application level. However, with 5G network slicing mainly dedicated to IoT, there should be a lot more movement in the IoT industry. Furthermore, regulators are opening frequencies for private networks that can be directly licensed by companies (as well as the use of public SA 5G networks).

Finally, with new RF connectivity modules also being developed it seems that the long-awaited growth in IoT could be just around the corner, as a number of driving factors look set to collide over the next two or three years.