An interesting lesson in customer service

MNOs are, like other service providers, eager to understand how they are perceived by their customers. This is just as well, since in most cases, the answer is either poorly or with indifference. There’s a lot of industry activity regarding customer experience management and there’s a realisation that MNOs have a long way to go.

There’s been a good deal of innovation in this area and most MNOs are trying to implement programmes to improve the experience they offer, through a combination of new innovations and automated systems, as well as more traditional tools, such as customer satisfaction surveys. It’s been a key area for us this year, as many of our customers offer interesting solutions to help elevate the customer experience.

We’ve also learnt a good deal from adjacent industries, in which there has been considerable innovation in customer service and experience – partly enabled by technology, partly by making the most of tried and trusted techniques, and partly by rethinking key business processes and training. We’ve written a number of articles on the subject, but a recent experience led me to reflect on how far the mobile industry really has to come to catch up with its peers.

One proven tool for obtaining such customer feedback is SMS, with many mobile providers sending messages to customers after some form of interaction. Many providers in other sectors also do the same thing, so it’s a well-established process. As a tool, this can be effective – it brings immediacy and, in most cases, the input requested is simply a score or ranking. And, as the process is automated, it costs little to run and repeat – by targeting enough users, sufficient usable data can be collected.

Of course, if you are going to carry out such surveys, it’s probably best to do them properly. So, when my provider recently sent such a survey to me, while I was on a lengthy train journey, I was quite happy to respond. You would imagine that mobile operators (who know where their customer are and have full control over SMS transmission) would be among the most effective at running such surveys.

The first few questions were fine – I received them and then replied, doubtless cueing the system to send the next in the sequence. I was a little puzzled as to why I was being sent the questions at that particular moment, as the railway line I was on is notorious for blackspots and I would have thought that the operator might have correlated my movements with the fact that I was dropping in and out of coverage to wait for a better moment, but, putting that to one side, I eventually received the final question, which asked me if I would be prepared to participate in further surveys. Why not, I thought and duly replied – for which I received doubtless heartfelt thanks.

What happened next was the real surprise. 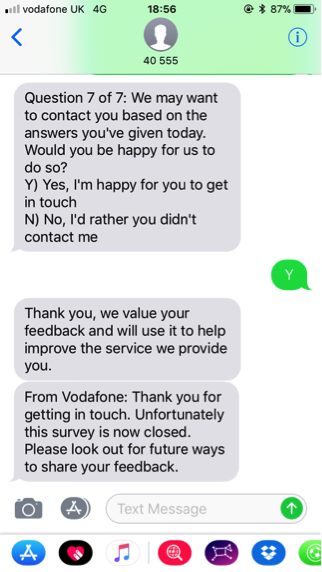 The very next message stated, as can be seen above, that the survey was closed. What on earth is Vodafone doing? If a survey has a limited duration, don’t invite people to participate. Don’t collect their responses and then tell them that they are, effectively worthless. Don’t, in short, waste people’s time.

This may seem trivial but it’s yet another example of how much mobile operators have to learn about customer service. The whole tenor of the final message is that Vodafone is doing me a favour (“Please look out for….”), whereas in fact, I am providing information that’s supposed to help them. What nonsense.

A minor incident, perhaps, but it resonated particularly strongly because this took place very close to the announcement of a slew of new initiatives to enhance the Vodafone brand. Apparently, among other things, it is seeking to invest in customer service and to create a new face to its customers – using the slogan “The future is coming. Ready?”

Quite apart from the fact that this is strikingly redolent of the slogan used by Orange when it launched in the UK several decades ago (“The future is bright. The future is Orange”, for those who don’t remember – how much did Vodafone pay for this stroke of originality?), you would imagine that, in support of this, Vodafone would have been particularly sensitive about obtaining customer feedback.

Instead, it solicits the desired feedback, mangles the process and then rejects the input. All of which makes for an interesting lesson in customer service. Yes, it’s true, mobile operators have a good deal to learn about customer service but even worse than doing nothing is to get it wrong. Personally, I try to respond to as many of these surveys as I can, mostly for the fun of it. But, no-one listens.

I’m not exactly a happy customer, but not sufficiently unhappy that I can be bothered to change provider – we all use the same network here at RMA (we can’t be bothered with a corporate account, because of the hoops we have to jump through, but it does make it easier to pay all the bills from a single card), but not once has Vodafone tried to get in touch with us personally to ask about its service levels, apart from to try to sell us something new.

Surely what it should be doing is looking at our account histories, offering us rewards for loyalty and more – instead of running badly designed and poorly executed surveys, from which, in any event, it’s unable to collect the information sought? And, the high street is filled with loyalty schemes that reward even the most casual user – your 10th coffee is free, happy hour, discounts, grab a bonus on your birthday, and so on. Why doesn’t the mobile industry exhibit the same widespread adoption of such tactics?

Truly, the mobile industry has a long way to go to match anything like the customer satisfaction levels seen elsewhere. It’s all very well investing in complex analytics solutions, but if you can’t get the basics right, what hope have you of really delivering a better experience?